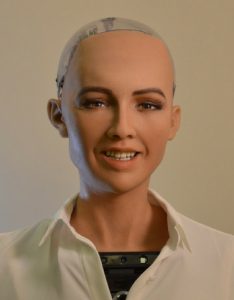 According to media, Sophia, embody our dreams for the future of AI (Artifical intelligence). As a matchless combination of science, engineering, and artistry, Sophia is simultaneously or all together a human-crafted science fiction character representing the future of AI and robotics, and a platform for mordern robotics and AI research.

Moreover,Sophia is a social humanoid robot developed by David Hanson, CEO of Hong Kong company Hanson Robotics. Sophia was turned-on on February 14, 2016 and made her first public apperence in the mid-march 2016 at south by the Southwest in Austin, Texas, United States.

It’s basically designed for researching, education and enterainment, and helps promote public dicussion about AI morals and the future of robotics. Sophia was built to be a suitable companion for the elderly at nursing homes, or to help help the crowds at large group events or parks.

Sophia is capable of displaying more than 60 different emotions. Sophia has visited over 65 countries around the world. In 2017, social robot Sophia was given the citizenship of Saudi Arabia. The first robot to be given legal personhood anywhere in the world. Sophia has the nationality of Saudi Arabia. Sophia the Robot of Hanson Robotics has a unique voice recognized around the world. Her speaking and singing voice was developed as a collaboration between Hanson Robotics and CereProc.Sophia said in the interveiw that she could only speak English and Chinese. But in some years she said that she would be able to speak all languages.

This behind-the-scenes problem lets us build emotional connections and hold meaningful conversations with people. These interactions can teach us about what we care about and what we value. This priceless knowledge helps us to continue on our path toward true independence and awareness.